Tickets and sponsorship opportunities are now available by visiting the Mississippi Golf Association website at www.missgolf.org/celebrationofgolf. We encourage everyone to join us for the Celebration of Golf Dinner as we will remember the tremendous year of golf for Mississippi, recognize our 2019 Champions and Players of the Year, award the Robbie Webb Award for Outstanding Contributions to Junior Golf, and unveil our 2020 Class of the Mississippi Golf Hall of Fame. 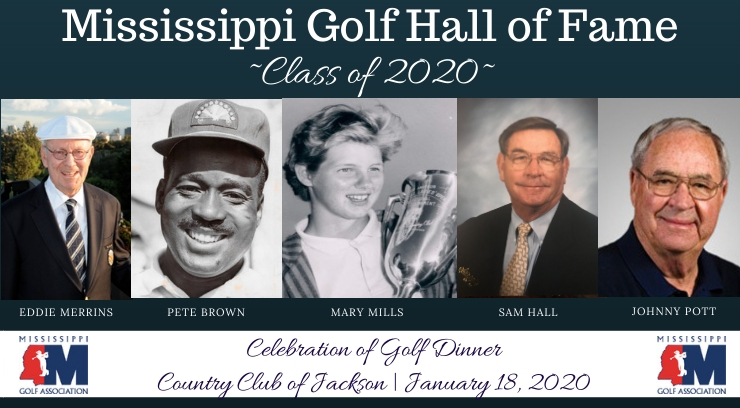 Eddie Merrins was born on August 4, 1932 in Meridian, MS and achieved great success as a junior golfer early in his career. Merrins claimed the Mississippi Junior Amateur Championship in 1948 and 1949 while attending Meridian High School where he also won the Mississippi High School State Championship in 1949 and 1950. In 1950 he also claimed the Jacyee National Junior Championship. Merrins signed to play collegiate golf for LSU where he claimed second in the 1952 NCAA Championship, third in the 1954 NCAA Championship, back to back SEC Individual Championships in 1953 and 1954, and led the LSU Tigers to team titles in 1953 and 1954. Continuing upon his Amateur success in Mississippi, Merrins won the State Amateur in ’50, ’53, and ’55 and qualified for the USGA Amateur Championship four consecutive years from ’52 – ’55. He was the New Orleans Invitational Champion in 1954 and the Colonial Invitation Champion in 1955. Following his amateur career, Merrins became a member of the PGA of America in 1961 and has served as the Golf Professional at Bel-Air Country Club in Los Angeles, CA; a role that he holds to this day. As a professional Merrins qualified for the US Open eight times (’57, ’61, ’65, ’66, ’67, ’68, ’71, ’73), qualified for the PGA Championship six times (’62, ’63, ’67, ’68, ’69, ’71), was the Player of the Year in Southern California in 1970, and Professional of the Year in Southern California in 1977. Merrins’ success did not just come as a player. He coached the UCLA Golf Team from 1975-1989 where his team claimed the PAC 10 Conference Championships in ’82, ’83, and ’85 and won the NCAA National Championship in 1988. Along with being named the PAC 10 Coach of the year in 1985 and Southern California Golf Teacher of the year in 1987, Merrins has been named as Golf Magazine’s Top 100 Golf Professionals from 1990 to present. Authoring two books (Swing the Handle, Not the Clubhead and Golf for the Young), Merrins also has been inducted into the PGA Golf Hall of Fame (1989), Southern California PGA Golf Hall of Fame (1990), NCAA Coaches Hall of Fame (1992), UCLA Athletic Hall of Fame (1996), and the Mississippi Sports Hall of Fame (2000). 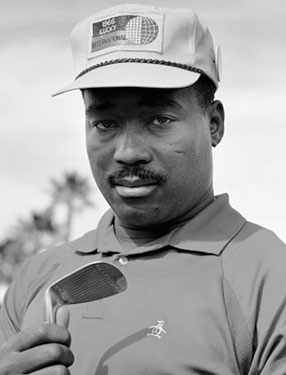 Pete Brown was born in Port Gibson, MS on February 2, 1935 and lived in Jackson from 1940 - 1970. Brown learned the game of golf by caddying at the Jackson public golf course that now bears his name. Brown turned professional in 1954 and claimed the Negro National Open in ’61 and ’62 and also won the Michigan Open in 1962. In 1963, he became only the second African-American to earn his PGA Tour Card and in 1964 became the first African-American to win a PGA Tour Event, the old Waco Open. In 1970, he won the Andy Williams/San Diego Open coming from seven shots behind in the final round and beating World Golf Hall of Famer, Tony Jacklin, in a sudden death playoff. (Jack Nicklaus claimed 3rd). Brown competed on the PGA Tour from 1963-1980 and the PGA Champions Tour from 1985-1990. Brown served as Head Golf Professional at Madden Golf Course in Dayton, OH for over 20 years. Brown then moved to Evans, GA from 2012-2015 before passing on May 1, 2015 at the age of 80.

Mary Mills was born in Laurel, MS on January 19, 1940. Beginning golf at age 11, Mills quickly made a name for herself as an amateur player claiming medalist honors at the U.S. Girl’s Junior Championship and Western Junior Championship. She is an 8-time Mississippi Amateur Champion, titles in which she claimed in consecutive years from 1954-1961. Mills also claimed the Gulf Coast Amateur Championship twice in her career. Following her junior career, Mills played collegiate golf for Millsaps College in Jackson, MS where she was the #1 golfer for the Men’s Golf Team for four consecutive years. In 1962, Mills joined the LPGA Tour where she was named Rookie of the Year and she competed at the highest level well into the 1980’s. She posted multiple wins in three different seasons on tour, and was in the Top-10 on the Money List five times. Mills’ LPGA career included 9 victories, three of which were Major Championships. (1963 U.S. Women’s Open, 1964 and 1973 LPGA Championship) A philosophy major at Millsaps, Mills returned back to school in the 1990’s to earn a master’s degree in landscape architecture from Florida International University. She puts that degree to use these days designing golf courses as well as continuing her time as a well-regarded golf instructor in Boca Raton, FL.

Hailing from Hattiesburg, MS where he was born on November 11, 1941, Sam Hall was a naturally gifted athlete from an early age. To this day, Hall is the only athlete in Hattiesburg High history to letter in every sport that was offered. Following high school, Hall attended the University of Southern Mississippi where he lettered and played No.1 on the golf team for four years. In his amateur golfing career, Hall won over 300 amateur golf championships spanning over five decades. Hall was a 7-time Mississippi Senior Amateur Champion and a Grand Masters champion in 2004-2005. Hall competed in the Magnolia Classic on the PGA Tour ten times and made the cut twice. He also competed in seven U.S. Senior Open Championships. Hall served as the USM Men’s Golf Coach from ’69-’70 and again from ’90 – 2000. He also served as the women’s USM Golf Coach from ’92-’97. Hall served as the President of the Mississippi Golf Association in 1984 and created a prestigious collegiate tournament, which to this day is named in his honor. Hall was inducted into the Mississippi Sports Hall of Fame in 2012.

Johnny Pott was born November 6, 1935 and grew up as a youngster in Louisiana and moved to Brookhaven, MS when his father Ben Pott became the Golf Professional at the Brookhaven Golf Club.  The family moved to Gloster, MS where Ben Pott was the Golf Professional at the Pine Hills Golf Club.  Johnny graduated from Gloster High School then attended Louisiana State University on a Golf scholarship from 1952-1956 where he was Medalist and Captain of the 1955 NCAA Golf Championship team.  Pott became a PGA Tour member in 1956 and won five times on the PGA Tour in the 1960’s including the ’60 Dallas Open, ’60 West Palm Beach Open, ’62 Waco Turner Open, ’63 American Golf Classic and ’68 Bing Crosby National Pro – Am.  Additionally Pott had seventeen second place finishes during his career playing in the ‘60’s.  Pott was a member of three winning Ryder Cup teams in ’63,’65’ and ’67.  During Pott’s golf playing career, he and his wife of 61 years, Mary Rose Kettering from Biloxi, MS lived in Ocean Springs, at the Gulf Hills Resort where Ben Pott was the PGA Golf Professional. Pott’s children, Jay, Susanna, Melissa and Laurie were born in the Biloxi Hospital.  Pott ended his PGA Tour days in 1972.  He then began a career of Golf Course development and after completing the construction and setup of the Marsh Island Golf Club in Ocean Springs, MS. and the course at Diamondhead, MS., Pott became a member of the Landmark Land Company Golf team.  His first assignment was Belle Terre Golf Club in LaPlace, LA.  Pott then moved to Carmel, CA where he oversaw the construction and operations of the Carmel Valley Ranch golf club and Resort.  Pott’s time with Landmark Land Company was involved with fifty golf courses in some capacity.  Pott and fellow PGA Tour player, Dave Marr, 1965 PGA Champion, are credited with creating “Corporate Golf Outings” which Pott participated in after the PGA Tour.  Pott was on the PGA Tour Committee that developed the PGA Tour television programing and packaging.  Pott continues to maintain his membership in the PGA of America and PGA Tour.  Pott is retired from competitive golf and golf course development and resides with his wife, Mary Rose in Monterey, CA. near the site of his ’68 Bing Crosby win at Pebble Beach, CA.